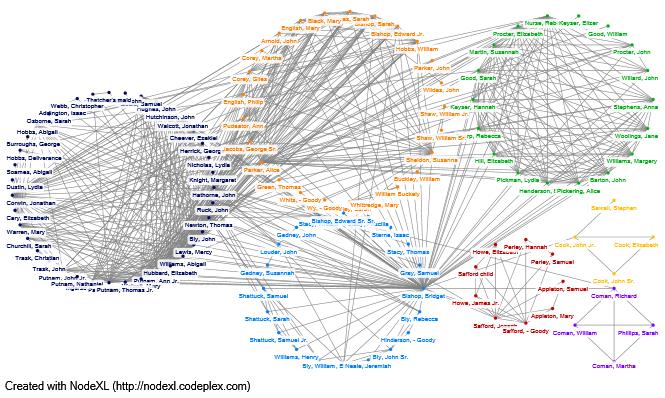 June 10, 1692: Bridget Bishop hanged in Salem after the Court of Oyer and Terminer found her guilty of witchcraft. She was the first of 19 people to hang during the 1692 hysteria. During her examination in April 1692, she insisted, “I am no witch.”
One way to look at the experience of Bridget Bishop is through her social network. In my current research to create a social network of the witch trials, I am able to take the documents relevant to her case in 1692 and show Bishop’s individual network before she stood trial. Below is the graph of her entire network which displays 119 vertices representing people and 632 edges representing relationships.

NodeXL’s algorithm grouped the vertices on the graph by cluster, and it shows seven clusters in the network of Bridget Bishop. The groups are based on the documents the names appear in for all the court records of Bishop’s 1692 accusation. The Navy group shows the general accusers and their accused that are not closely related to Bishop in the documents. The Orange group shows the accused suspects sent to jail in Boston with Bishop and includes the jail keeper. It also includes Susanna Sheldon and the persons named in her testimony since she accused most of those same suspects in the group. These suspects in the Orange group, like Giles and Martha Corey, Philip and Mary English, Alice Parker, George Jacobs Sr., etc…, also faced accusations from the girls in the Navy group, Ann Putnam Jr., Abigail Williams, Mercy Lewis, Mary Walcott, and Elizabeth Hubbard, but those five core accusers also named many more suspects. This is why Lydia Dustin appears in the Navy group, she faced accusations from the core accusers but doesn’t fit anywhere else in the network since she didn’t travel to jail with the same group as Bishop or face as many accusations at this point so she stays in the Navy group. The program sorted Sheldon out since she was not one of the main accusers and also not considered the most reliable accuser.

The Blue group includes Bishop, her husband Edward, and those who filed depositions against her that do not reference outside parties. This is a tight group since it is the group of people that definitely knew Bishop before the witch trials. In many cases, accusers did not know their targets but in creating the social network of the trials, an accusation creates a relationship. The program can group these together since they are much more solid connections in this case and the evidence presented by them helped to condemn Bishop. To the right of the Blue group, the Red, Yellow, and Purple groups are also for people who testified against Bishop: Joseph Safford, Richard Coman, and John Cook Jr. These groups are separate since they include more networks within their testimony. Safford also accused Elizabeth Howe who appears in the Red group, Coman and Cook reference their families but the family members cannot be directly tied to Bishop so they are grouped separately in much smaller groups.

The final group, Green shows those who were prepared for trial around the same time as Bishop: Rebecca Nurse, Sarah Good, Susannah Martin, Elizabeth Procter, John Procter, and John Willard. It also shows the committee who completed the physical examination on the women listed above and Bishop. Willard and John Procter were examined by a male committee. They are grouped together since the accused suspects are tied together, although not all directly; they are referenced with enough similarity to group them together. Only Bridget Bishop and Alice Parker are missing from that group of accused for those given physical examinations on June 2, 1692. Bishop is obviously absent since her network connected her to many more people in the graph and Parker traveled to jail with many of the suspects in the Orange group so she remains with them although her connections spread her influence in the graph.

The interesting thing to look at with social network analysis is the Eigenvector Centrality. This ranking describes where the power within the social network lies. As one would guess, in Bridget Bishop’s social network she holds the most power with a score of .041. The scale then drops significantly to the next group of individuals with the second highest score of .031 for John Hathorne, Ann Putnam Jr., and Mercy Lewis. To show the drastic decline in power, here is the social network filtered to only show those with an Eigenvector score equal to or greater than 75% of Bishop’s score. 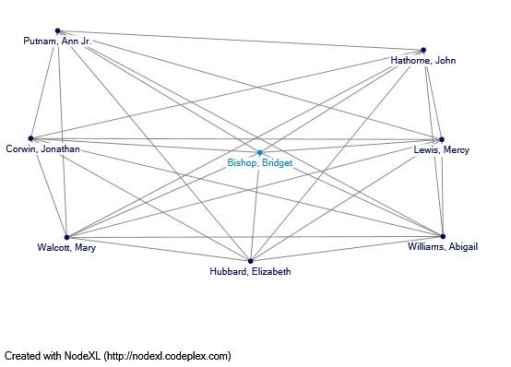 Only 8 out of 119 people have a score in the top 25% Eigenvector scores. Looking at those 8, its not surprising who they are, Bishop, the judges Hathorne and Corwin, and the core group of accusers, Putnam, Lewis, Williams, Hubbard, and Walcott. Aside from Bishop, the most powerful individuals in the network are in the same group. This analysis doesn’t include all their connections and accusations since it only shows the networks presented in documents relevant to Bridget Bishop, but when all the documents are looked at in total, those 7 people, the core accusers and judges, only continue to grow in power in comparison to the rest of the network since they are involved in most cases in the first half of the Salem Witch Trials. Below is a graph showing all the Eigenvector scores to demonstrate the decline in power after the first 9 people. Alice Parker nearly breaks the top 75% as one of the most connected suspects given who she traveled with to the Boston jail, and even though she is the second most connected person in the network, (Bishop with 70, Parker with 38, and Hathorne with 37), she isn’t one of the most powerful people. This small group controlled all the power. It is interesting the Parker ends up in the top 9 before another sharp decrease from her score of .029 to the next highest of George Jacobs Sr. and Ann Pudeator at .023. 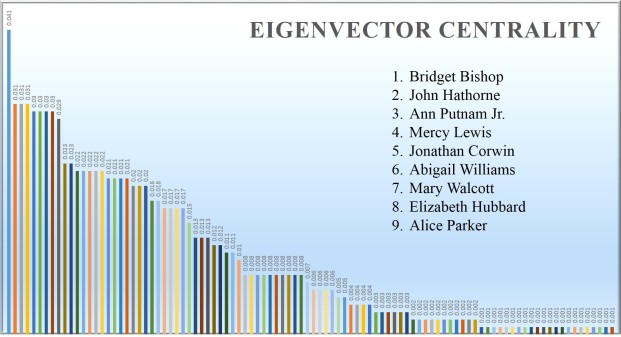 Parker’s high score implies that her case and Bishop’s case are similar. Both traveled to jail with the same group of people, both were given physical examinations by the same committee, and arrested and examined by the same men. This connected both women to the same suspects and prosecutors. The record of prisoners sent to jail on May 12, 1692, and those given a physical examination on June 2, 1692, only have 2 prisoners that overlap, Parker and Bishop. Although Parker is well connected in the network, she is well connected with the accused suspects which means these aren’t powerful individuals in the court records that this network is created from, so it gives her more power in her ability to stay more connected in the events, but it doesn’t help her gain any real power within the network, it makes her more associated with these witches. As I go through and finish the court records, I will be able to see how Parker’s network changes and how her connections to other suspects helps or harms her before her execution in September 1692 and one way my research may continue is looking at the cases like Bishop and Parker that appear connected within individual networks based on the court records, but that’s a long way off since there are still months of documents to graph.

What this type of analysis does is give a different way to look at historical information by visualizing data. Discussing the roles of judges and accusers against the accused can give one impression, but the visual of a social network analysis to show how much the power of the network centers around a few individuals. Looking at the network, Bishop’s power is really the power against her since almost every connection in her trial is negative. No one supported Bishop and her claims of innocence, her neighbors that appear with her name in the Blue group condemned her, so her Eigenvector score is her false power and more like the power against her going into her trial. It is no wonder then, that she was so easily found guilty and sentenced to hang.